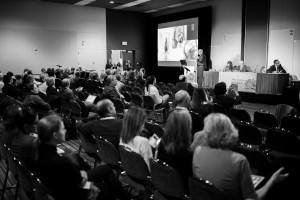 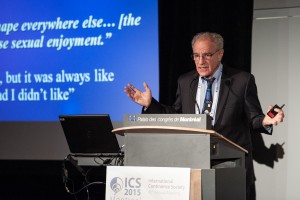 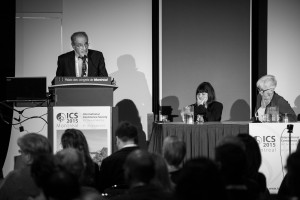 These photos are from the Annual Meeting of the International Continence Society (ICS), a multi-disciplinary organization devoted to the urinary and pelvic health of women and men. This year’s meeting was held in Montreal, Canada, and this was my first visit both to both the city and to the meeting. My decision to attend was the result of the Society having decided on women’s genital plastic/cosmetic surgery (FGPS) as the topic of their annual “Great Debate,” an event that is the highlight of the closing day of the Meeting. The debate always focuses on a topical and often contentious topic involving pelvic medicine.

The three debate positions presented were based on either “Never”; “Yes” or “Under certain circumstances”; and “Why Not?” I was invited to attend as the guest of the ICS to take on the last position — “Why not?” Rebecca Rodgers MD, a urogynecologist from the University of New Mexico, argued the “Never” position and. Linda Cardozo OBE, MD and a world-renowned urogynecologist from King’s College in London took on the middle position. Interestingly, in past years Dr. Cardozo had been a vocal critic of women’s genital plastic/aesthetic surgery, but over the years her position has changed and at the debate — she presented before me — her position actually served as an entrée to mine. (Full disclosure: Dr. Cardozo is also one of the Associate Editors of my new medical textbook, “Female Genital Plastic/Aesthetic Surgery”, forthcoming from Wiley-Blackwell of Oxford, U.K. and due to be released February 2016. She has also contributed a chapter to the book.)

Debates at medical meetings are always spirited affairs, and this one was no exception. While Dr. Rodgers was academic and quite disinclined to accept the fact that many women wish to alter the appearance of their “private areas” and/or tighten their vaginas for increased sexual enjoyment, Dr. Cardozo is the author of more than 300 papers in the peer-reviewed medical literature on women’s urogynecological issues, and agreed on both the philosophy of FGPS and the reasons and rights of adult women to seek these services.

After the hour-plus debate, the audience of over 150 voted, with Dr. Cardozo’s and my positions receiving the majority of votes from the audience. Several in the international group (mostly made up of urogynecologists) expressed interest in learning the surgical techniques that would enable them to offer these services to their patients.

Our office is open for full service for both on-site consultations, surgical services, and “virtual” services via telephone, Skype or Zoom. Dr. Goodman maintains Office Hours Wednesday and Thursday, expanding to Friday AM and occasionally Saturday AM for surgical services as needed.

We practice CDC-advised guidelines including surface cleansing, temperature monitoring, and mask wearing. We understand the reticence of many for in-person services, and have fully expanded our “virtual visit” capacity. Call the office, (530) 753-2787 for appointments and full information.