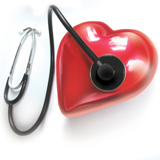 What is the effect of a low estrogen state on the cardiovascular system of women? This may be a random question; However, it’s a vitally important one for 51% of the female population. Here’s why…

Everyone eventually dies… And we all die from something. That “something” comprises of many accidents and maladies, but in women the largest single cause of death (51%) is from cardiovascular disease (heart attacks, stroke, other diseases of the heart and blood vessels.) As it would be nice if we were able to live a quality existence for as long as our inner machinery will allow, it helps to be aware of what will extend, or limit, our cardiovascular longevity.

OF COURSE, diet and exercise is paramount. Allowing for genetics, women whose diet relies on mac & cheese, fatty red meats, and lots of simple carbs (potatoes, refined flour, etc)-especially if she smokes– will live many years less than her smaller portions, less meat/dairy products/more veggies and grains “sisters.”

Also, women who religiously get 3 hours or more per week of “vigorous/out-of-breath” exercise will live a quality existence for years beyond her more sedentary neighbors.

This article will concentrate mostly on the effect of the ovarian hormone estrogen (more accurately, estradiol), on cardiovascular health and disease in women.

There is ample evidence in respected peer-reviewed medical literature that an absence of estrogen at any age will increase morbidity and mortality from heart disease. We have long been aware of this in postmenopausal women, but an article last year in the Journal of Clinical Endocrinology and Metabolism reported on the association of atherosclerosis (“hardening of the arteries”) with hypoestrogenic (low-estrogen) states in general, showing the adverse effects, in younger women, of “exercise-induced amenorrhea” (exercising and lowering ones body fat so much that periods stop because very low body fat stops ovulation and therefore estrogen production.)

An exercise routine that produces a low-estrogen state characterized by loss of menses has deleterious effects on endothelial function (the lining of blood vessels), while increasing inflammation in blood vessels and elsewhere. It puts the female body in a state of chronic low estrogen, which decreases the availability of nitric oxide to blood vessels, causing vascular inflammation and “oxidative stress,” which leads to cardiovascular disease.

Menopause is the cessation of ovulation, leading to the cessation of menses. Menopause, by its very nature, puts the body in a low estrogen state, exactly like what was just described in younger elite athletes. The peer-reviewed medical literature from both the U.S. and Europe is quite clear when comparing the incidence of cardiovascular disease and death in postmenopausal populations who do- and don’t- utilize estrogen replacement therapy (the same holds true for younger amenorrheic women): women who are chronically low on estrogen (hypoestrogenic) (e.g. postmenopausal women not taking estrogen) have an ~ 30-40% greater rate of earlier death from cardiovascular problems.

The fact that estrogen therapy improves cardiovascular survival in low-estrogen women is uncontroversial. But recent evidence goes well beyond this to the question of delivery system to the progestogen given with estrogen supplementation.

Delivery systems DO matter! Over the past 5 years, an impressive body of evidence has been accumulating proving the superiority of transdermal (patches, creams/gels, vaginal applications) vs. orally administered estrogen. Studies conducted in the U.S., France, and the U.K. strongly suggest that transdermal (TD) therapy is safer than oral with respect to blood clots (venous thrombolism) as well as strokes. Oral estrogen must be metabolized by the liver, as opposed to TD estrogen, which goes directly into the blood stream, and in the metabolic process releases procoagulant factors that are detrimental to health. (BTW, all transdermal estrogen preparations, whether compounded or commercially available are “bioidentical” -“BHRT”)

Also released in the oral process are hepatic metabolites that increase the body’s need for thyroid, and takes testosterone out of circulation, diminishing a woman’s sex drive. Again related to metabolism is the fact that oral estrogen is metabolized primarily to estrone, an estrogen compound riskier for the breast than estradiol.

The fact that TD estrogen improves triglyceride levels and other minor changes in blood sugar, lipids, and inflammatory factors makes TD estrogen especially safer for women challenged with diabetes and metabolic syndrome and acts to “seal the deal.” TD is better than oral.

But it does not stop there… Many women taking estrogen are required to take a progesterone compound to counteract potentially risky effects of “unopposed” estrogen on their uterus. Like the fact that “all estrogens are not created equal” is the fact that not all progesterone-like compounds are equally safe: Increasing data from both the U.S. and Europe prove conclusively that the “natural” compound progesterone is safer than any synthetic (NET; levonorgestrol), and far safer than the dreaded Provera ™ (medroxyprogesterone).

Testosterone also diminishes and, similar to men, in ~ 25% of women goes down rather steeply. Supplementation can help matters such as diminished energy, loss of libido, and persistent hot flashes.

The handwriting is on the wall: estrogen, for either younger women athletes or postmenopausal women, is generally safe and protective, more so if it is applied transdermally, and taken with progesterone rather than a synthetic. See a practitioner savvy in how to test for, and treat women with, testosterone.

Finally!  A first!  A book on menopause for men!  Author Dr. Michael Goodman shows men how to … END_OF_DOCUMENT_TOKEN_TO_BE_REPLACED